This is part two of a shared blog from Jay-Shian Tan and Kevin Wernli, two PhD students at Curtin University who were invited to attend the recent EP3 at the G as science correspondents. Part 1 ‘Integrating Explain Pain and Cognitive Functional Therapy in persistent low back pain‘ can be found here.

*This is my interpretation of how Russell went from a fearful, anxious person with a 35-year history of back pain, to someone with a new mindset on his back/life and hope for the future  – ‘a light at the end of the tunnel’ (a great example of a patients use of the metaphorical language that Jay discussed previously). This interpretation is based on my experience as a PhD candidate at Curtin University, my own research of Cognitive Functional Therapy, and my experience working in a Clinic with people like Professor Peter O’Sullivan, Dr JP Caneiro and many other exceptional clinicians.

The process of change

It seemed for Russell, the biggest change was his mindset (he said it himself). This is such a frequent story when someone is empowered through reflective questioning and behavioural learning. Especially when this is embedded in an individualised, biopsychosocial model of care. In fact, it is so frequent that we created an infographic summarising the common changes – see below. 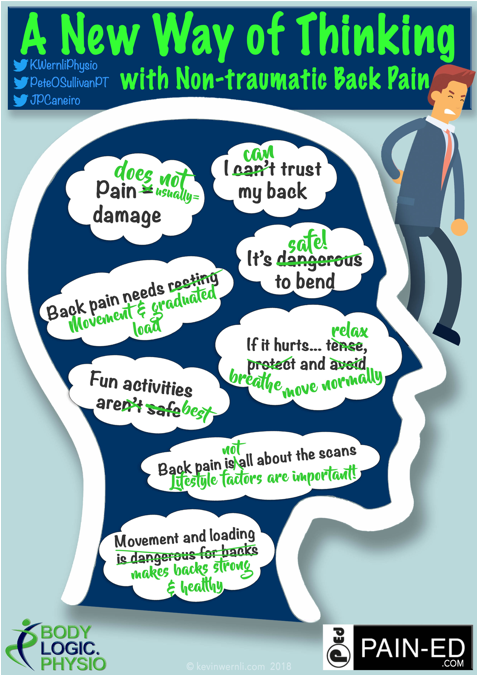 So how did an 80-minute session change a mindset that had been resistant to change for 35+ years? Perhaps it was education? One of the key messages from the Lancet series and the EP3 course was the importance of education to transfer knowledge (see Jay’s blog post).

It seems, one difference between the Cognitive Functional Therapy (CFT) approach and Explain Pain is the method of learning. Learning through storytelling, reflecting and experiencing (CFT), rather than learning through education and explanation (Explain Pain). One of the most interesting parts of the conference was Lorimer and Pete discussing the differences in these approaches in a scientific and respectful manner.

While the consult was grounded in a sound understanding of pain science (which is why I think the explain pain course is so important for those working with people in pain, as well as those who experience distressing pain and the broader public in general), there was very little pain neurophysiology education provided during Russell’s consultation, a point which provoked a lot of thought for Lorimer.

There are a few key things I took out of Russell’s learning process that I think enhanced his change.

Experiential learning – It seemed that the experience of no pain during bending (an activity that Russell would historically expect to hurt) was the key that unlocked his recovery floodgates. This process has a technical term (expectancy violation – stemming predominantly from the fear/phobia literature – see Craske et al 2014) and comes through the behavioural experiments, a key feature of the CFT approach. It seemed that modifying the over-protective guarding and avoidant habits Russell had become very good at led to a reduction in pain, disconfirming his beliefs, reducing his fear and activity limitation, and increased his confidence to control his back pain.

Time – Russel said it himself, just being able to tell his story was therapeutic. Being listened to, having his pain validated and having space to explain his beliefs, fears, expectations and goals helped to build trust and a strong therapeutic alliance – key ingredients in facilitating change and learning.

‘What’s your biggest fear?’ – A great question to pose to patients, and a massive learning opportunity. For Russel, he was very fearful of moving (in particular flexing, lifting and twisting). Predominantly because his previous experiences and encounters with the healthcare system had created very powerful DIMs (danger in me), reinforcing his back pain neurotag and likely reducing the threshold at which it fired (a double-edged sword which then perpetuates the problem). Ironically, experiencing lifting and twisting (a great and SAFE way to get strong, despite the gasp of the crowd), with strategies to control his pain, resulted in a huge learning experience and gave him the ability to re-engage with the world through movement. This reminds me of a quote from Robert Tew: “Sometimes what you fear the most is the very thing that will set you free” 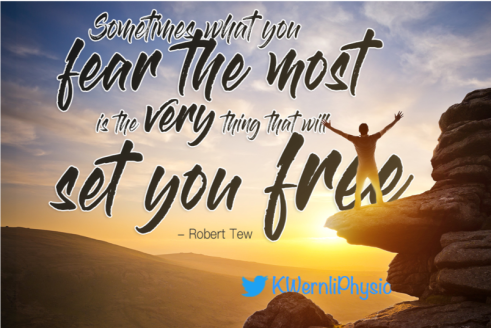 Coming up with solutions himself – Russell is the expert on Russell. Granted we have an idea of what’s best for our patients (the learners), but conveying that in a way that is meaningful for the learner is the important bit. Rather than passively giving Russell the answer, Pete expertly helped him figure it out in a way that made sense to him, plus people don’t argue with their own data.

Revision materials – they say people have a working memory capacity of 3-5 new things (see here), and often these aren’t the things you want them to remember (for example your perfectly permed hair). So, providing material that summarises key points is in my opinion, essential. Pete did this through summarising his journey on the whiteboard (this also helped to explain why Russell hurt), as well as videoing his home exercise program and coaching him through it with key points while he filmed… genius! An important test to help identify what the learners take home is something that has been dubbed ‘the Kieran O’Sullivan test’ on social media: 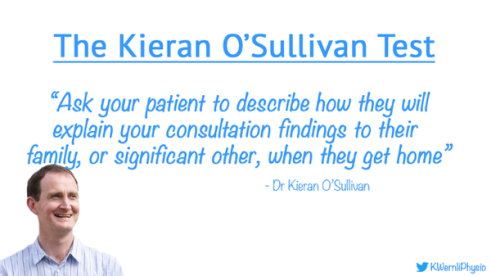 The order in which the important factors changed is difficult to confidently determine and is likely to be individual. The existing literature (which is limited) suggests that commonly, they all change together – see paper by JP Caneiro, Peter O’Sullivan and colleagues here, short video’s summarising my PhD here  and a poster of a case study here. The process of how people get from disabling low back pain back to living (and whether a change in movement is an important part of this) is a key focus of my research, so watch this space for more findings as they come to hand.

Overall, EP3 at the G was a fascinating, refreshing and important course in our quest to change the narrative of pain. To have three of the most knowledgeable, charismatic and driven people in the pain space, in one room, for three days, made for some incredible discussions, learnings and performances. It’s exciting to see the similarities and common themes among Dave, Loz and Pete and it was a real privilege to be in attendance, surrounded by passionate people causing a #painrevolution – “The tides are turning and the evidence is beginning to align, we are beginning to understand the best way to manage and prevent pain”. 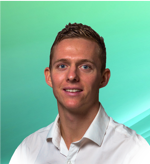 Kevin graduated from Curtin University in Perth in 2014 with a BSc. Physiotherapy (Honours). He then lived and worked on the Gold Coast, predominantly in private practice, before commencing his PhD back at Curtin in 2017. His PhD uses wearable sensors to investigate the relationship between movement and back pain and is supervised by Associate Professor Peter Kent, Professor’s Peter O’Sullivan and Anne Smith, and Dr Amity Campbell. He also works clinically part time at Body Logic Physiotherapy. He is passionate about empowering people to take control of their health as well as translating research into clinical practice (especially through infographics/videos). You can keep up to date with what he is up to through his social channels @KWernliPhysio.