I stopped at the graveyard of a local poet and philosopher. It’s in a wild spot on the west coast of Ireland. I’ve always thought it was a magnificent place to be laid to rest. Overlooking the Aran Islands and the Atlantic, you can see all the way to the mountains in Connemara on a clear day. Wandering past the turnstile, I see an old man coming towards me. His eyes meet mine and he says, “Well, how are you?” Sensing he is happy to chat, I linger a while. A born storyteller, he tells me the ruins of the church are from around the 12th Century, but to be wary “for that gable is going to come down sometime soon!”

His people are buried here, he remarks, telling me that the big gravestones are more of a modern invention; for generations people were buried here with just a stone to mark their final resting place. “The people who knew who they were are long since gone now,” he says ruefully, “and their stories with them.” The graveyard is bumpy, drumlin-like, dotted with many stones. Each one carrying a secret.

He speaks of the weather and the endless sunshine after the bitter winter. The talk turns to the drought. “Incredible,” he says, “even drilling a well here a kilometre from the shore and you could bring up salt water; while I’ve known people not 100 feet from the sea who sank a well and found beautiful fresh water. You can never tell.” I tell him of my luck growing potatoes this year, one crop fair and the other barely the size of marbles. I even had blight one year, I admit. A sobering experience. My friends told me to “spray those spuds … there’s a blight warning! ” The dreaded potato blight. But I’m not for spraying so I took my chances. I tell him I returned home to a crop destroyed, blackened and withered leaves and sludgy, foul smelling potatoes. Not a single one saved. But I am only growing for fun. Imagine if that was the crop to feed your entire family?

My storyteller friend says that now animals are being brought indoors and given the feed meant for next winter, there is so little grass, with the endless sun and no rain. He tells me of friends who had to plough their first crop of potatoes up after the big freeze in March, then their next crop was destroyed by a big storm which followed. “Sea salt and wind blackened them and uprooted them. Nothing to salvage,” he said quietly, “not even for eating at home.” Potatoes and famine are not far apart in conversation. He talks of emigration and the need to leave to make a living, of empty houses and generations torn apart by the separation. “But what if all the young people leave,” he asks me, “who will tell the stories then?” He tells me that during the Great Famine  families who lived up on the hills above this graveyard suffered terribly. Starving inland they came down to the coast to find food. A village made of dry-stone walls was built, potato ridges dug. Weakened from successive years of famine, eking a living from fishing was never going to feed a family. Fishermen pawned their nets for food or to pay the rent. If they had nets, the perilous coastline, treacherous Atlantic swells and inadequate boats made fishing life threatening in all but the calmest conditions.  Most died… the old, the young, and the infirm. Those who survived left, America or Australia bound, taking their chances on the  “coffin ships”. The population was decimated.

“A famine village remains,” he says, “fourteen houses, down by the water’s edge. It’s down that bóithrín [little road] there,” he gestures to me. “You should go down and look.”

Taking my leave I mull over the stories told and now lost. Most of the estimated three million who died or departed were speakers of the native language. Legendary stories and fables shared in our native tongue and passed from generation to generation, were lost, mostly to America or to the grave. Reports surfaced of pipers and fiddle players ending their days in the poor house, instrument makers and collectors of traditional music and songs perishing and their knowledge with them. What was described as ‘an awful unwonted silence’ fell in the ‘land of song’. The landscape, stories and language changed forever.

The road down to the sea

The road down to the sea is overgrown, dry-stone walls, blackberry briars, and ferns all leading to the waters edge. A friendly local dog keeps me company.

It’s picturesque and wild – postcard stuff – but then the famine village reveals itself. Not more than 50 feet from the ocean lie the bones of a small village in ruins. The gable ends are a ghostly reminder of what once stood. It is impossible not to think of those who lived here, their suffering, their pain and their loss.

An unbearably poignant place. I don’t enter. It’s not a graveyard where people were laid to rest. This is a place where desperate people died from hunger, typhus and dysentery. There is no peace here. It’s an important ruin however, a reminder of those long gone and maybe even forgotten. A reminder not to forget.

As my friend in the graveyard said, our stories need to be told and if everyone leaves who is there to tell them? So linger a little, fall into conversation with a stranger, there may just be an important story to hear… and even, perhaps, to retell. 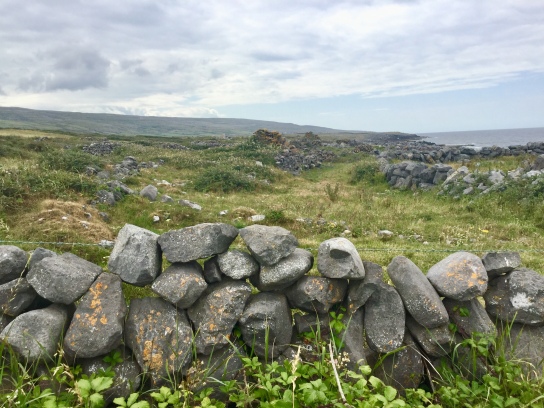 Ruins of fourteen famine houses all along the waters edge

Gable ends, a ghostly reminder of what once stood.

Blanaid  is a senior clinician in Castleknock, Dublin, Ireland where she specialises in treating patients with persistent pain. She is also a regular writer for noijam. Her interests include pain, epidemiology and storytelling.

13 Responses to “The Storyteller”