This post first appeared on Dr Kal Fried’s site Kalblogville. It is re-posted here with permission from, and our thanks to, the author.

The Traffic Jam (literally ‘the plug’) of Pain

I love riding my bike in France.

One of the reasons is that there is a notable difference in the temperament of the traffic, especially compared with Melbourne, my home town. Now that is not to say that all French drivers are perfect angels, but there seems to be only a small proportion who have adopted aggression as their driving mantra. I have visited a picturesque town called Annecy in the Haute Savoie (Northern Alps) region on a few occasions as a base for my rides and notably, despite the narrow streets and summer vacation hub traffic, the infinite number of cars flows patiently. There are frequent ‘pieton’ (I love the French word for pedestrian; it is so ‘un-pedestrian’) crossings and it is rare for cars not to stop promptly for any number and spacing of pietons. The traffic seems to flow in a well-ordered fashion, and on occasion when I hire a car I can confirm this from a motorist’s perspective as well. At times when I noticed a problem involving traffic participants, a typical French accented ‘pffffff’ and a gallic shrug of the shoulders was preferable to hysterics and outright aggression. As a bike rider, I rarely feel in peril from a car in this region, which is a stark contrast to the way motorists approach me regularly in my home town. On a narrow road in France, cars will stack up patiently behind me, and the many other cyclists, waiting to pass without any transference of irritation.

Observing this ordered flow of traffic as the norm, I started to formulate a thought about what can be achieved when a group of people think in unison, equalise the needs of others to their own needs and simply just calm down. Despite hating being stuck in traffic to the point where I no longer own a car, I started to see this regulated flow of cars as a somewhat beautiful thing. I often sense the same sort of beauty in a well organised peleton (ie: group) of bike riders helping each other to maximise the gain from efforts against a head wind in a steady rhythmic manner. It is the beauty associated with seeing a human collective achieve a common goal together with everyone understanding, accepting and playing out their role willingly.

In traffic and in group cycling, a set of easily understood and instructed rules is formulated based on knowledge of what must occur for the best ‘greater good’ result. However, this on its own is insufficient. For this to work optimally, widespread consensus, co-operation and goodwill is required. There are clearly sociocultural factors that influence the uptake and implementation of this process for the best possible result and so far in my travels, the French seem to me to have the finest temperament for traffic to somehow be considered ‘beautiful’.

A lot of time for contemplation

In addition to the exceptional French food and wine, the superb countryside and the amazing ‘cols’ (mountain passes) to climb, this is another reason why I love to ride my bike in their country.

When cycling, there is a lot of time to contemplate (particularly at my uphill speed) and I often find my mind wandering to my work interests. I began to reflect what could be achieved if a similar approach could be attained in the contrasting, rather discordant world of pain management. Despite seeing beauty in the way pain science explains why pain can be so disproportionate and persistent, I rarely have a sense of beauty viewing the way this science is handled by the health professions.

At this point I will address the obvious criticism of what is to follow which is – ‘why should we all just do it your way?’ I certainly don’t have all the answers but I have learnt that the current confusion within the pain management fraternity itself is largely unhelpful and is paradoxically and irresponsibly only serving to feed the ‘danger’ side of many pain equations.

My recent attendance at a major pain conference left me musing similarly but without a view of beauty; quite the opposite.

I considered the audience which would have included many searching for methods and answers to take back to their clients. I considered that these people must have been either cognitively selective in their uptake of information or confused by the multiplicity and variance of pain management techniques and priorities. Presenters espousing the importance of a consistent curriculum in pain biology education co-existed uneasily with those targeting pain with standard therapies, interventions and pharmaceuticals. The evidence for the latter categories is wanting unless ‘belief’ and ‘self-interest’ have transitioned into scientific method. Furthermore, there seemed no consideration of the ‘catch 22’ effect of convincing people in pain that they need these therapies, interventions and pharmaceuticals while simultaneously trying to convey the pain biology message that the brain produces pain for protective reasons based on perceived need alone. There seemed inadequate appreciation that confusion and inconsistency of message feeds pain processes voraciously and that the conference educational methodology would only likely promote such a result with the variety of traffic jam promoting take home messages. I discussed my perspective with an ‘educationalist’ of renown at the conference to obtain a nod in resigned agreement.

The trade exhibit was another excellent example of the point being made in this piece. If attending a pain management conference, please score the booths. The tally for ‘ you are damaged goods’ targeting interventions and pharmaceuticals will be predictably overwhelming.

I attended this conference immediately after my spirit-lifting participation in the inaugural Pain Revolution Ride (PRR) this year; an event in which there was much beauty. I found my spirits deflated after the conference despite some excellent individual sessions. The beauty yearned for in a collective working together for the best possible result, and achieved in the PRR, was not forthcoming.

A recommendation for reform

I recommend that a reform process be undertaken urgently by the pain management fraternity and that this reform process prioritise the following as pre-requisites:

Just like in traffic in which cars, bicycles, pietons and others need to co-exist, in science too, the best rules are the ones that cater to widest needs and serve the greatest good in the safest and most reliable way. To achieve this end-result, they best be widely consensual, easy to learn, understand and teach to others. For the most optimal French-traffic-like icing-on-the-cake result, sociocultural acceptance has a role to play. If people stick to rules such as these, then everyone benefits.

Only when this is achieved will it be possible for all to have the empowerment to process injuries, degeneration of tissues and pain events optimally, and trust in the power of biological and neurobiological re-adaptation for the best possible result. Only when this is achieved widely will beauty be sensed regularly in the real-world application of the scientific method relevant to pain. The difficulties in pain management will not then seem insurmountable as they seem now, but will be met with a shrug of the shoulders and a ‘pffffff’. 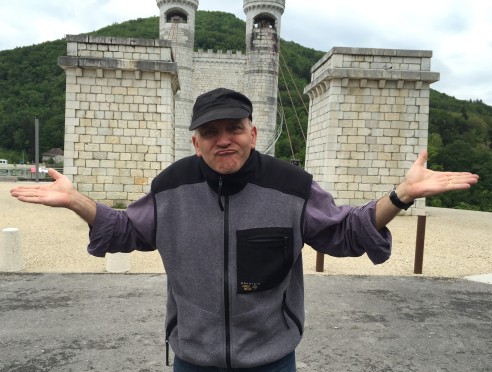 Kal attained Fellowship of the Australian College of Sports Physicians in 1995 and has gained extensive experience in this field both before and after that milestone. He was appointed as the AFL Australian International Rules team doctor in 2011 and 2013 and has also supported other elite sporting teams including the Australian Diamonds netball team in 2012. In addition to general sports medicine Kal has developed a particular interest in the neuroscience of pain, the potential to ‘de-sensitise’ persistent pain, the biopsychosocial management model and exercise & conditioning prescription.

Kal is also a Pain Revolutionary and took on the the challenge of riding from Melbourne to Adelaide (870km!!) over 8days and 7 nights in April 2017, raising money for pain research and participating in outreach events along the way.

2 Responses to “Le Bouchon de la Douleur (only the title is in French!)”