Words that jump off the page

There’s a thing that happens when you start to get into a bit of philosophy – words that were previously read lightly or taken for granted, can start to jump off the page and ask hard questions. One such word, I’ve noticed, is the seemingly innocuous word, cause.

A basic definition of the word is the relationship between events or things where one is the result of the other. In everyday use we hear it in phrases such as ‘the cause of the accident was inattention due to mobile phone use’, and use of the word is rife in health and medical circles – ‘the cause of death’ or ‘smoking causes lung cancer’.

The correlation between the number of films that Nicholas Cage appears in during a year, and the number of people who drown by falling into a pool is compelling, but no one would suggest that this graph should be used to deny the planet the silver screen pleasures of National Treasure (1 and 2), Face/Off or the (sadly overlooked for an Oscar) Con Air

However, the following graph does suggest a cover up of a sinister plot involving dairy cows and the bed linen industry

But the whole correlation does not equal causation thing seems to be largely under control, with this statement being common enough in scientific circles, online arguments and blogs to have earned t-shirt slogan status. 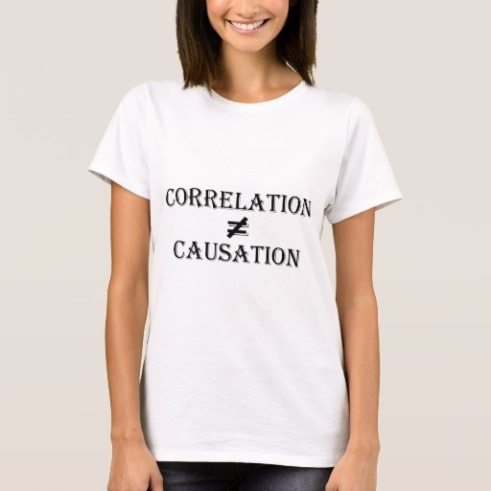 A deeper problem, a circular habit

On the other hand, there may a deeper problem with the word cause, one going back quite some time. David Hume* (1711-1776) was a Scottish philosopher who tackled the very idea of cause and effect from a metaphysical (the part of philosophy that deals with basic concepts such as existence, being, knowing, time and space) perspective. 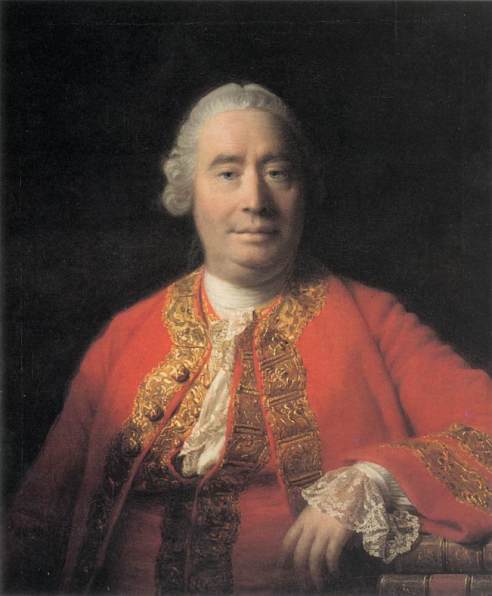 Hume is known as an empiricist philosophically – an argument that suggests that all we know, and can know, comes from what we can experience. In applying this empiricist approach to cause and effect, Hume argued that we could never really experience a cause, but rather could only know that two events occurred closely together in space and time.

Take, for instance, the example of  our experience of weight. We are accustomed -habituated- to experiencing some objects as being heavier than others, and if you ask most people what would happen if you dropped a bowling ball and a feather from the same height at the same time, the likely answer will be that the bowling ball will hit the ground first. If you ask why, inevitably the answer will be because it is heavier – the greater mass of the bowling ball causes the earth to pull on it more (which we experience when we lift it), causing it to fall faster .

But, in one of the most wondrous bits of film you’ll see, it is clear that our experiences in the world can be misleading about cause and effect:

Ultimately, Hume was skeptical that we could ever truly know that one thing or event caused another

“When we look about us towards external objects, and consider the operation of causes, we are never able, in a single instance, to discover any power or necessary connection; any quality, which binds the effect to the cause, and renders the one an infallible consequence of the other.” (emphasis added)

How Humean are you?

Hume’s works and thoughts have been the source of raging (philosophically speaking) debates based on multiple interpretations of his work. Some people have taken Hume very literally (the very Humean), while others have suggested that Hume never intended to be so skeptical about our ability to have knowledge of causes and effects (the not so Humean). If you really want to dig into this, the Internet Encyclopedia of Philosophy page David Hume: Causation offers an accessible introduction.

Wherever you stand on the Humean scale, Hume’s idea that we can not experience a cause, and that we should therefore be skeptical about our habitual notions of cause and effect, is at least intended to encourage one to think more carefully about the use of the word, and perhaps examine more closely statements about the relationship between things and events in the world…

Getting to the point… finally

The preceding was a rather long introduction to one of those moments when words jump off the page and ask hard questions. Earlier in the week, a piece appeared on theconversation.com entitled Can the way we move after injury lead to chronic pain? (can you see the sneaky cause-effect insinuation already, hidden in that headline?):

“This important protective strategy [changes in how we move] is mirrored by altered activity in our brains. A large body of evidence shows that short-term pain causes a reduction in activity in the regions of our brains that control movement. (emphasis added)

One doesn’t have to be all that Humean to stop and question the use of the word cause in this example. How could the author know that pain, an intangible, subjective, complex experience, causes some physical change (reduced activity) in the brain?

The large body of evidence cited is a systematic review and meta analysis of neuroimaging and electrophysiological studies investigating “(1) altered activation of S1/M1 during and after pain, (2) the temporal profile of any change in activation and (3) the relationship between S1/M1 activity and the symptoms of pain”. Sounds very correlational, but the cited authors also fall into causal language “We present evidence from a range of methodologies to provide a comprehensive understanding of the effect of pain on S1/M1″ (emphasis added).

The use of the word cause might be just careless thinking solidified into sloppy writing – a certain metaphysical naiveté, if you will. But it can also be a sneaky way for authors to try to influence you into thinking that they have found a much stronger relationship between things or events, than actually exists – usually at the cost of over-simplifying the underlying complexity of the real relationship. Just a little Humean skepticism might lead to some pointed questions next time you read, or hear, the word cause.

But then again, perhaps it’s all just trivial philosophical semantics?

*My apologies to any Humean scholars, a set to which I clearly do not belong, for the extremely terse and rather simplified presentation of Hume’s ideas.

THE 2017 NOI CALENDAR IS SHAPING UP, HERE ARE THE CONFIRMED DATES

Check out our courses page for details and to enquire

DAVID BUTLER IS HEADING TO THE UK AND EUROPE IN 2017

Check out our courses page to make an enquiry

HAVE YOU DOWNLOADED OUR NEW PROTECTOMETER APP YET?

Just search the App Store from your iPad for ‘Protectometer’

10 Responses to “A philosophical cause”