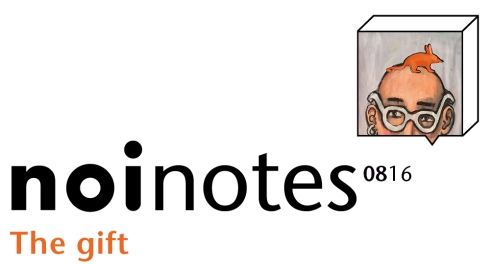 Grateful patients often bring gifts to clinicians. I have had some rippers over the years ranging from half a sheep and gallons of wine to shirts of every possible colour. A friend of mine was offered a car once, but that’s another story.

Last week a very special gift, beautifully wrapped and with FRAGILE stickers all over, arrived in the mail. I had not met the giver but he had read and used Explain Pain and The Explain Pain Handbook: Protectometer and I knew he had chronic pain and post-traumatic stress. Out of the wrapping emerged a wooden bilby, hand carved by the gifter. 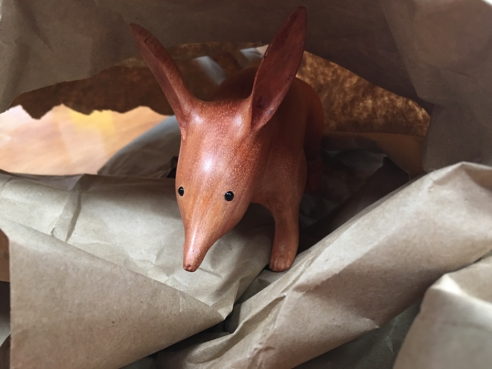 One hundred hours of labour

For the non-Aussie readers, a bilby is a small desert dwelling burrowing marsupial, now sadly endangered. Most Aussies know about the bilby because it’s a mascot for Australian endangered animals, the cute factor due to its big ears, and recent attempts to replace the chocolate Easter bunny with the Easter bilby.

I caressed my bilby. It was smooth and invited handling. Beautifully carved from precious Queensland Red Cedar that smelt of the forest. I studied the intricacies of the craft – each ear was different, there were the honest marks of hand tools left by the creator, and a unique signature marked his belly. I estimated it must have taken the carver around a hundred hours. 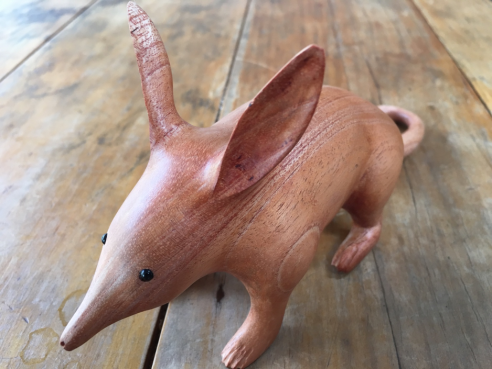 The most powerful drug used

I felt quite moved by the gift and I tried to work out why. After all, I had been given plenty of gifts before. First, and most powerfully, there was a letter that accompanied the bilby – three pages of carefully hand written cursive. With no ability to cut and paste or delete and re-type, a hand written letter suggests a great deal of planning and thought, and multiple drafts – even before the content, a hand written letter is a gift in itself.

The content of the letter was very emotional – a personal journey through hardship, conflict, and finally, a path to recovery;

Wow – I know this is a key concept in Explain Pain, but I also know that it can be really difficult to truly accept. I imagined him considering this message during those many hours of hand carving and shaping. It seems my bilby-maker really understood ‘The brain is boss’. I was reminded of Rudyard Kipling’s famous quote,

“Words are of course, the most powerful drug used by mankind”

When you can use words to explain pain to yourself and others, then you’ve got it! What a powerful learning tool!

It’s so easy to blame the minor things

Secondly, the ‘Bilby in the bath’ is a key part of The Explain Pain Handbook: Protectometer where the little bilby is blamed for the bathwater overflowing, forgetting all the large and sometimes nasty DIMs (Dangers in Me) already lurking in the bath.  It’s so easy to blame the minor things for pain or stress – the cold, what someone says, a posture, an x-ray, a label, a diagnosis or a movement, rather than looking more deeply 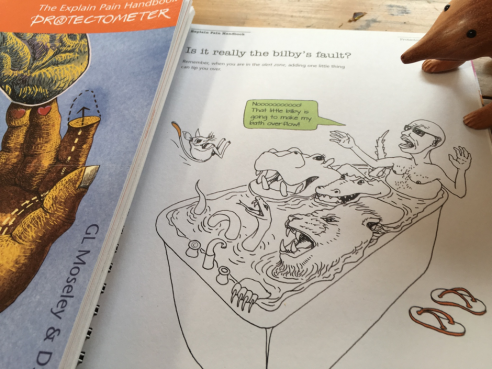 And even more, I hoped and thought the bilby must be a symbol of progress and carving it a creative help. I have always asked patients, ‘What has your problem done to your creative life?’ in the belief that restoration or new creativity is highly therapeutic, wakening the brain’s own problem solving abilities.

The bilby now resides in pride of place in our office. I can’t think of Mr. Bilby as mine though – it’s for co- writer Lorimer Moseley too, everyone in the NOI office and every scientist, educationalist, writer and clinician who has played a part in the Explain Pain movement.

Drop in and check out the bilby if you are in Adelaide, and we would love to hear your stories about the gifts that have moved you in the comments below.

HAVE YOU DOWNLOADED OUR NEW PROTECTOMETER APP YET?

Just search the App Store from your iPad for ‘Protectometer’

EP3 events have sold out three years running in Australia, and we are super excited to be bringing this unique format to the United States in late 2016 with Lorimer Moseley, Mark Jensen, David Butler, and few NOI surprises.

9 Responses to “The gift”