An epidemic no one talks about

Pain statistics feature at the beginning of every talk or presentation on chronic pain – 1 in 5 people affected, billions of dollars in treatment costs and lost productivity, thousands of hospital admissions per capita, and so on and so on. But the problem with big numbers like these is that they can overwhelm and numb the listener. Prevalence studies and economic statistics have informed us for over a decade that chronic pain is a global problem, and while there are some signs that things are getting better, chronic pain is still a mostly silent epidemic.

You know something John Snow
Throughout history, one common factor in dealing with and preventing epidemics has been public education. Check out the ‘Friendly Advice to Poor People’ below. In 1849, the best advice given to the public to avoid ‘the cholera’ was to go to bed early, drink no sour porter and observe ‘the duty of all persons’ to ‘pay particular attention to the slightest degree of Diarrhoea, or looseness of the bowels’. 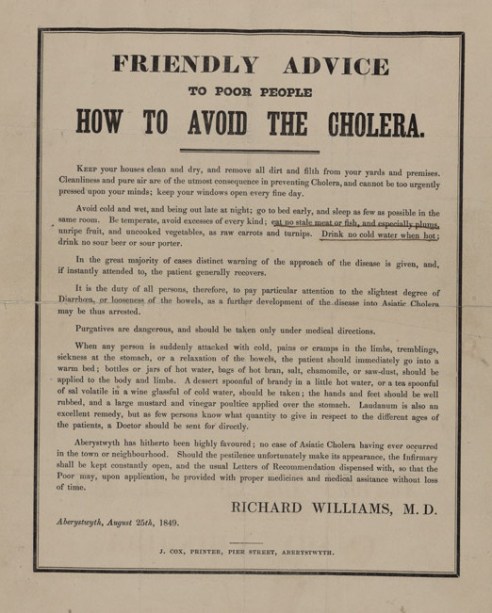 The discovery by English physician John Snow (not that one) in 1854 that a contaminated public water pump in Soho was the source of a cholera epidemic, was fundamental in changing the public education message. See the poster from 1866 below.

Cholera is still a problem in parts of the world, but it is preventable and treatable – the spread of public awareness regarding sanitation, clean water supplies* and simple treatment with re-hydration has saved millions of lives.

Each year Chronic Pain Australia runs a week long public awareness initiative known as National Pain Week. This year, the theme is fitting with a silent epidemic; Pain – the invisible challenge. Chronic Pain Australia has enlisted Michael Clarke, one of Australia’s greatest cricketers, as an ambassador for National Pain Week and he is using his celebrity and personal experience of chronic pain to encourage people to start talking about the problem of pain

For more details on National Pain Week check out the website here. Other initiatives with similar goals of public awareness and discourse include the American Chronic Pain Association Pain Awareness Month each September (David Butler has been asked to feature on a podcast related to Pain Awareness Month – keep an eye out via NOI channels for details).

At NOI we agree that with chronic pain reaching epidemic levels, part of the solution has to be improved public awareness and education, and as educationalists, we are all for getting an up to date and accurate message out to all as we aim for a Number Needed to Educate of 1. Below are some of our ideas on how to help get the message of chronic pain out there.

Prevalence
Sometimes it can be appropriate to get a bit ‘in your face’ when trying to get a message across. Remember those pain statistics up the top, we think they can be given some punch with a few simple tweaks. Based on current figures the number of people living with chronic pain in Australia is equal to the entire population of Queensland – about 4.6 million people. Imagine an entire state, millions of people, where every single individual experiences ongoing pain everyday. Every person you see on the street, on a bus, at home, at work… including you, is in pain almost all of the time. This might get people talking…

Or consider the most recent numbers out of the United Kingdom based on a systematic review which estimates just under 28,000,000 (all those zeroes might help get the point across) adults are affected by chronic pain. This number represents the entire populations of

It’s also greater than the entire population of Australia – imagine an entire continent where every single person is experiencing ongoing pain.

Chronic pain is estimated to cost Australia over $34,000,000,000 every year. Our politicians have been squabbling over spending nearly this amount on a National Broad Band Network (which incidentally, if done well, could give millions of people access to the knowledge, information and resources they need to treat pain), yet every year billions of dollars are lost from the economy as a result of chronic pain.

We hear it sometimes, ‘yes, pain is a big problem, but it doesn’t kill people’. Our response is a resounding BULLSHIT. Pain kills people, opioid overdose deaths have quadrupled in the US between 1999 and 2014 with 165,000 people dying over this period. In 2012 70% of all accidental opioid deaths among Australians were due to pharmaceutical opioids.

Do it for the kids and the other ‘missing groups’

Most pain statistics don’t include children and adolescents – these are truly invisible groups in the world of chronic pain. And consider this – in the 1980’s infants were still undergoing open heart surgery with no anaesthesia as it was thought that they didn’t feel pain. But chronic pain affects between 25% and 35% children, especially adolescent girls.

Children aren’t the only missing group – pain is a major problem after stroke and in people with Parkinson’s Disease, multiple sclerosis and other neurological disorders, but it gets hardly any attention.

Words and messages that are associated with images are more memorable – they’re more ‘sticky’. There are some simple guidelines for effective, evidence based multimedia education, and a good infographic can make a strong point with very few words

Punchy statistics can have their place, but they can still be hard to relate to. Chronic Pain Australia have enrolled Michael Clarke’s as an ambassador to tell his personal story, and perhaps even a few might hear what he has to say and think, ‘if he can talk about pain, then so can I.’

When people are encouraged to tell their story, and given the time and space to do so, the words that flow can often have an arresting effect. Consider these statements recorded as part of a phenomenological analysis of the personal experience of chronic low back pain

‘When you don’t feel you have a future, you live in the past.’ Rachael

‘I’m sort of mad at myself I start banging things and getting so aerated with myself that it’s there and I can’t get it to go away.’ Linda

Perhaps sharing some of these experiences as part of your next talk with health care providers, insurers or other stake holders will help get the message across.

Remember that DIMs and SIMs hide in hard to find places.

The idea of pain as a silent epidemic fits perfectly with the idea that ‘DIMs and SIMs hide in hard to find places’. We’ve found consistently that sources of ‘Danger In Me’ can be as invisible as pain itself, but appropriate Explain Pain and careful use of the Protectometer can help uncover these sources of threat in the world.

Perhaps some of the most powerful SIMs that an up to date, globally aware and socially engaged health professional can provide to a patient is the knowledge that the problem of pain is being acknowledged, and that there is hope for better treatment and outcomes.

So join the Explain Pain revolution – support the awareness weeks and months online and in your community, get out in the world and get vocal, because if there is anything that Jon Snow has taught us it’s that knowing nothing is no longer an option.

Add your voice in the comments below.

*The lack of clean water and sanitation is tragically still a major problem in parts of the world – there are many organisations that are working to end this problem – wateraid.org is just one of them.

EP3 events have sold out three years running in Australia, and we are super excited to be bringing this unique format to the United States in late 2016 with Lorimer Moseley, Mark Jensen, David Butler, and few NOI surprises.

19 Responses to “The silent epidemic”